WEDNESDAY 25TH MAY AT 5PM 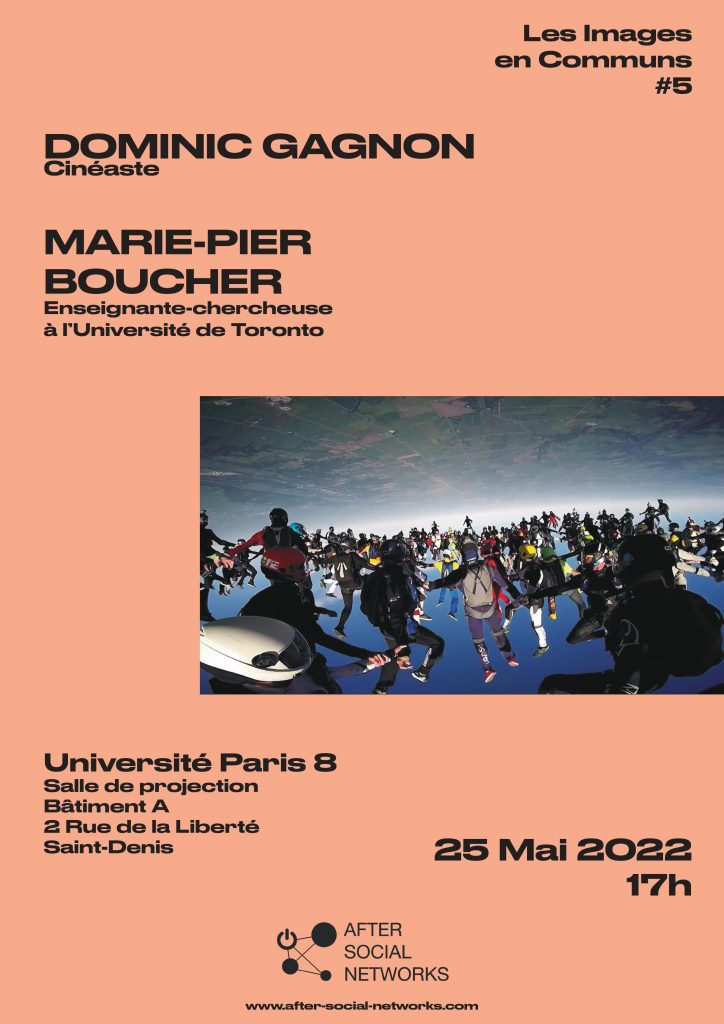 For this fifth session of the seminar, and the first one in person, we are pleased to welcome the Quebec filmmaker Dominic Gagnon and the researcher Marie-Pier Boucher for a meeting about Dominic Gagnon’s next film, life in space and in extreme environments, weightlessness, documentary science fiction, but also confinement.
The meeting will take place in the screening room of the University of Paris 8 Vincennes-Saint-Denis at 5pm on 25 May.

Born in 1974 in Quebec, Dominic Gagnon has been directing some twenty short and feature films since 1996, and since 2009 and Rip In Pieces in America, he has been developing what he calls “saved footage”. To put it in a few words, it is the editing of non-viral videos retrieved essentially from YouTube and targeting a specific subject. Saved”, both for the extremely marginal character of these videos and for the fact, as he frequently explains, that their saving is partly motivated by the high probability of their deletion by the host. With Of the North, released in 2015, Dominic Gagnon began a cycle devoted to the imaginary of the cardinal points, which has found a recent extension in Going South and Big in China.

Marie-Pier Boucher is an Assistant Professor of Media Theory at the Institute for Communication, Culture, Information and Technology at the University of Toronto. Prior to joining the University of Toronto, she was a Mellon Postdoctoral Fellow at the Center for Art, Science and Technology + Program in Science, Technology and Society at MIT. Her research focuses on the design of life-sustaining habitats in extreme environments. She is currently working on a book project that investigates the relationship between health, architectural design, and perceptual activity in a range of extreme environments (physical and symbolic) to examine how changes in direction and orientation induced by levitation and microgravity can inform the design of earth-based habitats. She is also working on an umbrella project, Interplanetary Habitation: The Earth, the Moon, Mars and the City, which investigates the socio-technical future of planetary life in relation to growing concerns about health and biotechnology, mobility and artificial intelligence.